The world has changed. Europe’s neighborhoods are going up in flames causing real problems for the stability of the European Union (EU). European Member States have considerably downsized their foreign and defense spendings due to the Eurozone crisis and lingering economic slowdown. The United States is retrenching; Russia is ever-more aggressive; China is getting more comfortable with its role as a regional hegemon. The threats, from climate change, to migration, to nuclear proliferation, to territorial invasion, are becoming more than ever complex requiring regional and international cooperation and emphasizing the decline of the liberal world order.

In the meantime, the EU was evolving without a clear strategic role as its strategic foundations were based on the 2003 European Security Strategy and framed a world order that seems long gone. But experts and European diplomats have been mentioning that a new European Security Strategy  was in the making. This was officially confirmed during the address on December 8th of the HR Representative, Federica Mogherini, calling for a reflection on a new common strategy, the so-called EU Global Strategy on Foreign and Security Policy (here is the link of the EEAS website on the Global Strategy).

The 2003 document, which has been extensively analyzed and written about, had several purposes (for more details refer to the following book). First, in 2003, the EU was highly divided due to the invasion of Iraq by the United

States. HR Javier Solana used the document in order to find a new political unity among the ‘old’ and ‘new’ Europes. Second, with the invasion of Iraq, the US violated core international principles and went alone in Iraq on the idea of preemptive actions bypassing the UN Security Council. The EU felt the necessity to emphasize their core principles for foreign actions: ‘effective multilateralism.’ Last but not least, HR Solana saw the importance to frame the security threats facing the European Union as whole, which had never been done at the European level.

Until today, the strategic baseline of the EU remains the 2003 European Security Strategy adopted by the European Council at the 2003 December meeting and its update, the 2008 Report on the Implementation of the European Security Strategy. The 2003 document was deeply influenced by Robert Cooper and politically promoted by the savvy-diplomat, and at the time High Representative, Javier Solana. The rather short but precise 2003 document followed by its update can be summarized as such (see previous analysis here): 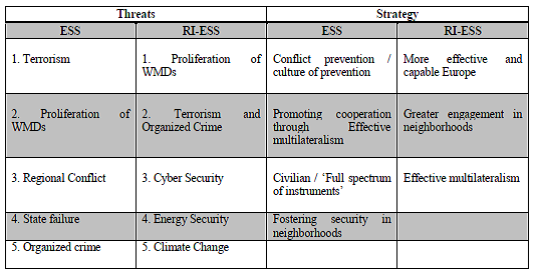 The two problems with the 2003 ESS and 2008 RI-ESS are that both documents do not reflect the new nature of the EU and the agency (note it is not an institution) of the European External Action Service (EEAS) since the Treaty of Lisbon (read two reviews on the EEAS here and here); and that EU and its Member States have not only become risk-averse but as well seeking to do foreign policy on the cheap.

“The world has changed so much since our current strategy of 2003. It is an excellent one, but from a completely different world; a world that allowed the European Union to say that it had never lived in such a secure and prosperous environment. Clearly this is not the case today anymore”

Mogherini’s world is far from Solana’s. The degree of interconnection has accelerated in a

matter of a decade. In addition, the Europeans and Americans have been reluctant to play the role of regional power by being more proactive and then active in stabilizing the neighborhoods from the South to the East of Europe. The Arab Spring changed the complexity of politics and affected the balance of power around the Mediterranean sea. General Qaddafi and President Mubarak, once powerful Arab leaders, are gone leaving a power vacuum in North Africa. Then Syria is in the middle of a civil war seeing the rise of a powerful terrorist network, the Islamic State of Iraq and Levant (ISIL) and causing Syrians to flee their homeland. The Al-Assad regime, Russia and a multitude of factions are fighting a bloody civil all under the bombs of Western powers. To the East, Russia has simply invaded and acquired Crimea from Ukraine and has fought a war in Eastern Ukraine, while violating European airspace and cyberspace on weekly basis. Ultimately, HR Mogherini is correct when framing the world we live in as such:

And today we clearly see that we cannot run and hide from what is happening around us. Everything that is important to our citizens is influenced by our international environment. And there is actually no distinction, no borders, no line between what happens far away, what happens at our borders, in our region, and what happens inside our European Union. Even these categories are now losing sense. When it comes to the terrorist threats, when it comes to migration, what is far, what is close, what is inside, is getting confused.

Mogherini’s question is based on the fact that the world does not have any longer global rules. By ‘global rules’ she implies the ones implemented and enforced by the ‘liberal world order’ established at the end of World War two and enforced by the US through a complex institutional networks and sticky sets of norms, principles and rules.

I believe that in an age of power shifts as we are living, Europe can be a global power and a force for good. I believe that faced with increasing disorder, Europe must be the driving force pushing for a new global order: a global order based on rules, on cooperation, and on multilateral diplomacy.

HR Mogherini is calling for the design of new global architectures, based on post-World War two structures, in order to foster cooperation and enforce stability. And here is the problem. The old architecture is centered around the US. Today the US needs the collaboration of new powers like China, India, Brazil and Turkey. The liberal world order will have to be first readjusted to today’s world order centered around a multitude of powers.

Her address is certainly not the final document and is, as she mentioned, in a mode of

consultation and reflection. Mogherini emphasizes the success of multilateralism and the need to avoid unilateralism. She identified recent success stories of international cooperation such as the nuclear agreement between Iran and powerful actors and the COP-21 with world leaders meeting in Paris under a UN umbrella structure. But her address feels like a déjà-vu due to a lack of creativity in the strategic thinking process. Mogherini wants the EU to be a respected global actor, but there is a serious gap between ‘wanting’ and ‘being.’

The address lacks of teeth by directly underlining how the EU and its Member States will be acting? How much will be invested in the CSDP? Are EU Member States all committed to pool resources at the European level? What are the instruments at the disposition of the EU to deal with the war in Syria? the refugee crisis? Is there such thing as a European interest? Last but not least, what about power projection? Mogherini wants to inject the European citizens in the drafting process, but none of the critical and contentious issues are mentioned, and even less addressed. This address sends the message that the EU is more of a ‘complaisant’ power than a real power. The 90s European belief of a post-power world with the EU at the forefront is deeply engrained in this discussion. Let’s hope that the EU Global Strategy will not be a recycled 2008 RE-ISS.

(Copyright 2015 by Politipond. All Rights Reserved. This material may not be published, broadcast, rewritten or redistributed without permission.)