Syriza won the 2015 Greek elections with over 12.5 percentage points on New Democracy. Syriza elections at the head of the Greek government should not be seen as a surprise. It was in fact a continuity of its rise. For instance, in May 2014, the party had already won the majority in Greece, with 26.6%, for the European elections. Ensuing the results, Syriza did not have enough votes in order to fully control the new Greek government. The question was answered when Panos Kammenos, the leader of the coalition partner, Independent Greeks, a right-wing party, decided to join forces with Alexis Tsipras. The Independent Greeks, whom received 13 seats at the Parliament, formed a coalition with Syriza, holding 149 seats (two shy of the majority). Independent Greeks and Syriza share one element in common: desire to renegotiate the terms of the bailouts and ending the austerity measures (See below the distribution of power inside the new Greek Parliament).

In any case, Alexis Tsipras, will become the next greek prime minister. His mandate is based on ending the austerity measures, while maintaining the flow of European assistance to Greece. M. Tsipras, as Chancellor Merkel, President Hollande, know very well that a Grexit – exit of the Greece from the Eurozone – would be a terrible moment for the Euro and the EU. But one of the core questions is: how much are European partners – Germany, France and the European and international institutions – prepared to compromise with him?

Seeking for Dignity and Political Sovereignty

The current legislative elections in Greece have become more than just an election. By bringing Syriza to power Greek citizens want to change the political direction of their country. For now six years, the greek economy is in recession and the succeeding governments – socialists and conservatives – have all continued the same policy based on austerity measures in order to clean-up Greek finances. However, these measures, attached to the succeeding bailouts, have had terrible consequences on the quality of life in Greece.

For the first time in recent years in Europe, it is not a extreme-right wing party threatening to overtake power, but an extreme-left. These elections raise important question: the future of Greece in the Eurozone; the future of austerity measures implemented by the Troika (Commission, European Central Bank, and International Monetary Fund); and the return of democracy in Greece. After voting, Alexis Tsipras made two pledges: first, “Democracy will return to Greece.” Second, “the choice is clearer than ever. Either the troika comes back and continues its work and its catastrophic politic of austerity, or we are moving towards a difficult and tense renegotiations with our partners in order to re-conquer our dignity.” Tsipras was able to base its campaign on the themes of dignity and national sovereignty. In a report on France Inter, a French journalist was describing the emotions of Greek citizens as they feel proud of having reconquered their political sovereignty, which is not anymore under the helm of the Troika -at least for now-.

However, Wolfango Piccoli, managing director at Teneo Intelligence in London, told Bloomberg Businessweek that “Tsipras will be the celebrated winner, but delivering on voters’ larger-than-life expectations has not become easier after the landslide victory.” The next day will be tough for Greeks and Tsipras. Many questions are now being asked in Greece: who will compose the new government? how will Tsipras be able to renegotiate the terms of the bailout? how will Syriza be able to govern?

The Real Impacts of the Austerity Measures

The case of Greece within the Eurozone diverge from other Eurozone members like Italy, Spain, Portugal or even Ireland. When Greece was on the verge of defaulting in 2008, the main reason was that the political class had cooked the numbers for quite some time. Greece had been for decades under a corrupted political class. Syriza rise to power put an end to the perpetual control of Greek politics by either the Papandreou or the Karamanlis family and their connection to powerful oligarchs. If one recall, it took a long time for the other Eurozone members to decide on saving Greece and then how to implement a plan in order to save Greece and keep it inside the Eurozone. In some way, the members wanted to give a lesson to Greece. It has been now more than five years since the first bailout package was delivered to Greece. The first package included “€110 billion ($150 billion) and was first agreed upon by the euro-zone member states and the IMF in 2010.”

In counterpart to receiving bailout money from the Troika, Greece has had to implement serious structural reform in order to reform the labor market and in liberalizing areas of the product markets. Aside from the reforms, the Greek government had to cut pensions, lay out large amount of public servants, and so forth. Certainly Greece lied and did not follow the guidelines established in the Eurozone once it adopted the Euro in 2001. But the costs of the austerity measures on Greece and the greek society have been terrible. How do the austerity measures translate into daily life? For most of Western citizens, these are two words reflecting government spending cuts in most social policies. Well, for Greece and Greek citizens, austerity measures look like this: 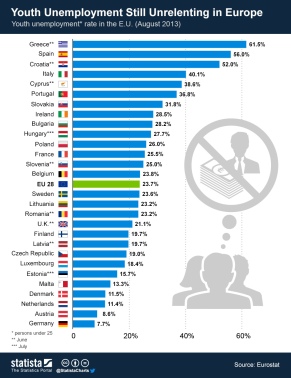 In some part of the country, Médecins du monde, an international non-governmental organization, is now providing healthcare. On its website Médecins du monde writes that “the measures destined to save the financial system do not take into consideration the human consequences.” In some ways, considering the numbers above, it is not difficult to understand why Greek citizens picked the Syriza route over the traditional center right/left.

Will the elections of a radical left party save Greece? Not really. Syriza is far from being a silver bullet. However, it could offer some serious leverage in order to loosen the weight of the austerity measures, re-negotiate the terms of the bailout, and find a long-term plan for Greece. Additionally, Syriza has become for many a political experiment in a Europe in search of a new political and economic life. Syriza does not appear to be a red revolution, but rather a road for more human transition.

Dying in Greece because of poverty is a reality, and is unacceptable on one of the richest continents. Greece is a core EU Member State, it is a Member of the Eurozone. The European Union is a political and social endeavor between a group of states committed to such goal. The force of the austerity measures and the requirements on Greece in order to save the Union back in 2008 may have been a necessity at first considering the degree of interconnection between all world banks. However, the continuity of their effects on Greece should have long been renegotiated. The EU has become a multi-speed Union, composed of a Northern Group and Southern Group (rich and poor) on many important issues: in defense with the CSDP; in democratic and judiciary terms – see at Romania, Bulgaria and Czech Republic -; in economic policies – look at Greece, Portugal, Spain and Italy -.

The ECB announced last week the beginning of a massive Quantitative Easing (QE), a program open-ended by nature – at least until the inflation rate of 2% is attained – of a value of €60 billion a month. However, the European QE won’t be enough until the European economic engines are not reformed and become more competitive. In parallel, the European Commission has announced the launch in 2015 of its Juncker Plan, a €315bn investment fund program intended to kick-start the European economy/ies. Both plans, QE and the Juncker Plan, will be necessary, but Member States ought to address their economic, industrial and financial models at home and harmonize them with European regulations and commitments that they agreed to.

Syriza won’t solve Greece’s problems, but it will once and for all bring important issues on the European table. The 2008 financial crisis has had devastating effects on most European citizens. The European welfare states are under-attack; unemployment levels among European youth is too high for any viable future of the EU-28 and the Union; and the rise of political extremes – right and left – endangered democratic foundations. Syriza’s message embodies all these elements. Money won’t solve it all, but politics will. As underscored by Christian Odendahl and Simon Tilford of the Center for European Reform, the three areas of negotiations will be required in Greece: debt relief, austerity, and structural reform. Both side, Greece, and the international institutions and EU Member States, will be bargaining for their side during tense period of negotiations. Both have some nuclear options, as highlighted by Odendahl and Tilford, “the withdrawal of liquidity for Greek banks, which the ECB has said it is considering; and the unilateral default on official loans by Greece.” The bottom is line is keeping Greece in, while loosening government maneuvers.

These elections are for the first time since the 2008 financial crisis illustrating a real popular call for ending austerity measures through neo-keynesian policies (read here a good analysis on the issue), and not anti-globalization and mercantilist policies advocated by extreme-right parties. As Tsipras told Greek citizens a week ago, “Our victory is also a victory of all the people of Europe struggling against austerity, which is destroying our common European future.” Europe will be watching carefully the way Tsipras implements its reforms, while keeping Greece in the Eurozone, keeping the flow of foreign aids, getting private investments, and rebuilding the public sectors to acceptable standards. “Populist parties across Europe” writes Judy Dempsey “are cock-a-hoop over Tsipras’s victory, seeing it as an inspiration for their own political ambitions.” But a failure by Tsipras will be the nail in the coffin for radical lefts and socialist parties around Europe; while a mild- or full- success could change the economic, social, fiscal and monetary debates in the decades to come. Greece is hoping; Europe is monitoring; the World is watching.

(Copyright 2015 by Politipond. All Rights Reserved. This material may not be published, broadcast, rewritten or redistributed without permission).

politipond by Maxime H. A. Larivé is licensed under a Creative Commons Attribution 4.0 International License.
Based on a work at https://politipond.wordpress.com/.